Although some retailers have already started marking down items and cueing the holiday music, the season will kick off in earnest next week.

Retailers are preparing for crowds of shoppers as the holidays approach, with retail sales expected to grow between 3.8% and 4.2% this year to between $727.9 billion and $730.7 billion, according to the National Retail Federation. For many, it’s not the holidays until they shop for bargins on Black Friday and Cyber Monday — some will even take advantage of the retailers that will be open on Turkey Day.

Last holiday season sales climbed 2.1%, according to the NRF. While Cyber Monday beats out Black Friday for the day with the most online sales, according to Deloitte, ShopperTrak found that Black Friday is expected to remain the busiest shopping day of the year in the U.S.

Younger generations will likely fill up the aisles during these busy shopping days, said Marshal Cohen, chief industry advisor of The NPD Group, because they can “withstand the crowds” and “love to be a part of the action.” About one-third of Generation Z shoppers (up to 22 years old) and 20% of millennials plan to start shopping on Black Friday, whether it be online or in stores, according to a recent NPD report.

While online spending this holiday season is expected to hit a record $143.7 billion, according to a study by Adobe Analytics — a 14.1% rise from a year ago — and retail forecasts have been clouded by the U.S.-China trade war and the threat of another economic slowdown, retailers like Best Buy are still preparing for flocks of shoppers to their store as they hire thousands of workers for the season. Many of the retailers have already told shoppers what to expect, like a Vizio 70″ Smart TV for $600 at Costco and a Chromebook for $99 at Walmart.

When stores will open

Can’t wait until Black Friday to snag your gifts? Some stores will open right around when you’ll be finishing your turkey dinner. Best Buy, Target, Macy’s and Kohl’s will all open their doors at 5:00 p.m. on Thanksgiving. For those who want to get even more ahead, J.C. Penny and Old Navy will welcome shoppers even earlier that afternoon.

Other retailers, including Home Depot, Barnes & Noble and Lowe’s will wait until Black Friday to open. Membership-only stores Costco, Sam’s Club and BJ’s Wholesale Club are also in that boat.

Kmart will be getting a really early start — 6:00 a.m. — and Walmart will remain open 24 hours with Black Friday deals running from 6:00 p.m. until supplies last.

See below for a list of retailers’ Thanksgiving and Black Friday hours. Local hours and closing times vary by market: 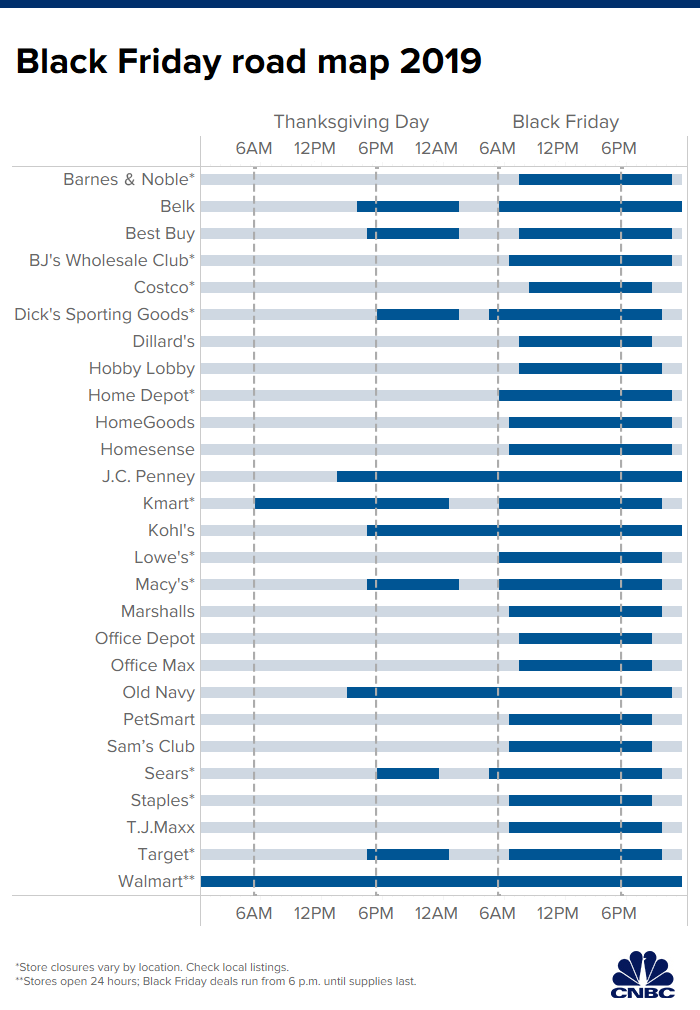 View all posts by GFAdmin →